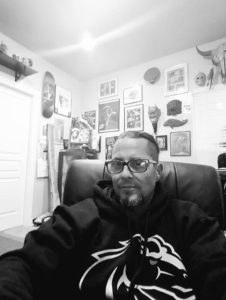 Robert S. Harrah is a local artist in the Boise area.  Expressing himself, in some fashion of art, has been a part of his life since childhood.  As a child he would use clothing to express his unique style and found solace in sketching.

Robert has been an award winning tattoo artist for the past 24 years.  With much notoriety in the bay area of California.  His work has been  featured in tattoo magazines, newspaper, television and MTV Rock the Vote.
Through vision and imagination, he is a self taught painter and freelance artist.  Robert is passionate about his work. Oil painting, acrylic, pencil and ink are just a few of the art forms he enjoys. He is dedicated and devoted to his craft and this radiates throughout his work.
Spending time outdoors and becoming an avid hunter, has inspired Robert.  When he is not painting, he is spending time enjoying Idaho life with his family.

They made him the author both of a series of ridiculous write essays for money publications and schemes of their invention and, crucially, of those genuine contemporary writings that they thought absurd.